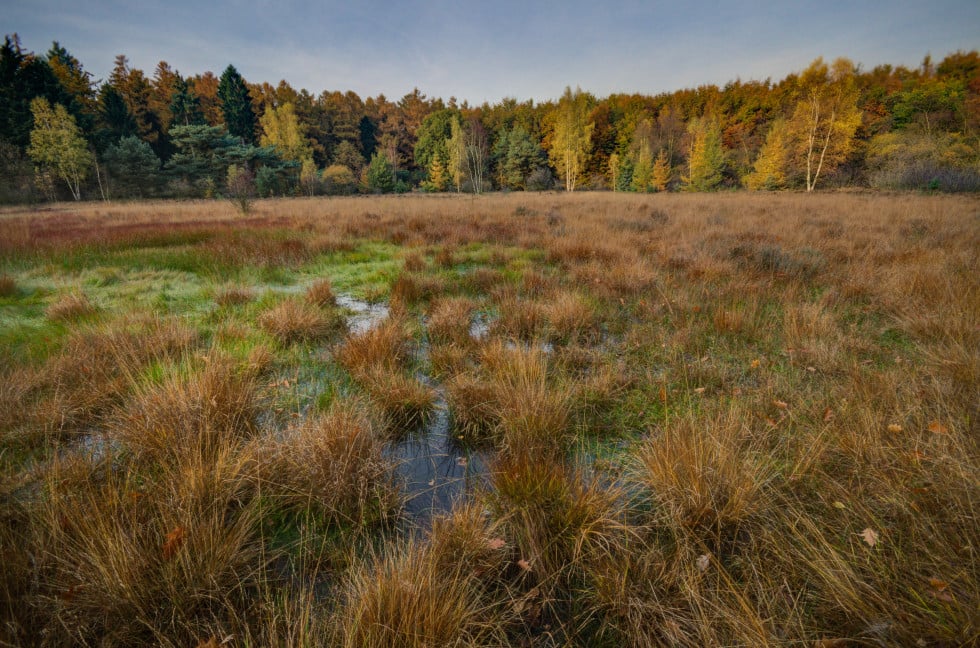 Updated on 2/17/2020:  On January 23, 2020, the new WOTUS rules went into effect, limiting federal jurisdiction to wetlands that are connected via surface water, excluding ephemeral streams and isolated wetlands. With this new  ruling, the US loses nearly 18% of its stream protections and as much as 50% of wetland protections. States like Nevada and Arizona lose upward of 85% of their water protections. Again, the question stands: if the impetus for this rule change is to save money and time on regulations, why is no one talking about technology?

Updated on 10/02/2019:  On September 12, 2019, the US Environmental Protection Agency finalized its repeal of a 2015 Obama Rule for jurisdictional WOTUS by the federal government.  This change will largely impact the 22 states where the Obama Rule has been in effect.  This decision will create nationwide regulatory confusion and lawsuits.  I will continue to stay abreast of the details and provide relevant updates on new publications.

As the Chief Scientific Officer of Ecobot, it is crucial that I address the pending changes to the rules of implementation of the Clean Water Act proposed by the current administration.  While all regulations must be occasionally looked at in order to evolve with the times, the proposed changes, if implemented, would be a great tragedy to the both the environment and the economy of the United States.  The proposed changes to the protection of “the Waters of the United States” (WOTUS) would be a major backward step in responsible progress of our country and the world at large.

The Clean Water Act of 1972 (CWA) and its implementation by the US Environmental Protection Agency (EPA), is currently under review by request from the Trump administration.  As amended in 1972, the law established the basic structure for regulating pollutant discharges into the waters of the United States, or WOTUS.  Implementation of the law gave the EPA the authority to implement pollution control programs such as setting wastewater standards for industry, and protecting other WOTUS from discharges and impacts.  WOTUS are regulated by the US Army Corps of Engineers (USACE) on a federal level for any potential discharges or impacts, and also by various State agencies for water quality certification for similar discharges and impacts.

Due to various legal interpretations of the regulatory limits of the CWA by the USACE or EPA since its inception in 1972, the Trump administration has sought to undermine the clear establishment of what waters would be regulated by EPA and USACE.  This comes partly in response to confusion in the regulatory industry, especially recently in 2006 in a Supreme Court case, Rapanos v. United States.  US Justice Anthony Kennedy argued that CWA protection applied to wetlands that “significantly affect the chemical, physical, and biological integrity of other covered waters.”  Simultaneously, US Justice Antonin Scalia argued that WOTUS protection only applied to wetlands “with a continuous surface connection” to a navigable water, thus a significantly smaller percentage of wetlands and streams in the US.  It was never totally clear which opinion took precedence.  In response, the Waters of the US Rule was published in June 2015 under the Obama administration.  This outlined which WOTUS were automatically covered by the CWA, thus requiring permits for discharges, dredging, or dirt fill.

The EPA and the Army Corps has estimated that the Trump administration WOTUS reduction proposal would reduce federal protection of 18 percent of streams and 51 percent of wetlands in the United States.  The proposal is rightfully causing uproar in the environmental community for a multitude of reasons, perhaps most important among them is this:  one-third of the nation’s threatened and endangered species live only in wetlands.  Regardless of one’s opinion of threatened species, every single resident of the United States should care about the impact of these changes for this reason alone: wetlands filter our water and buffer storm events – especially important as these events increase in frequency and severity and have an increasingly dramatic impact on urbanized areas.  The proposed rule changes would seriously impair the protection of WOTUS across the entire nation due to newly proposed rules of what the definition of WOTUS corresponds to.  Simply put, millions of acres of wetlands and thousands of miles of streams across the entire country would suddenly be threatened by unregulated development due to the loss of federal protection. 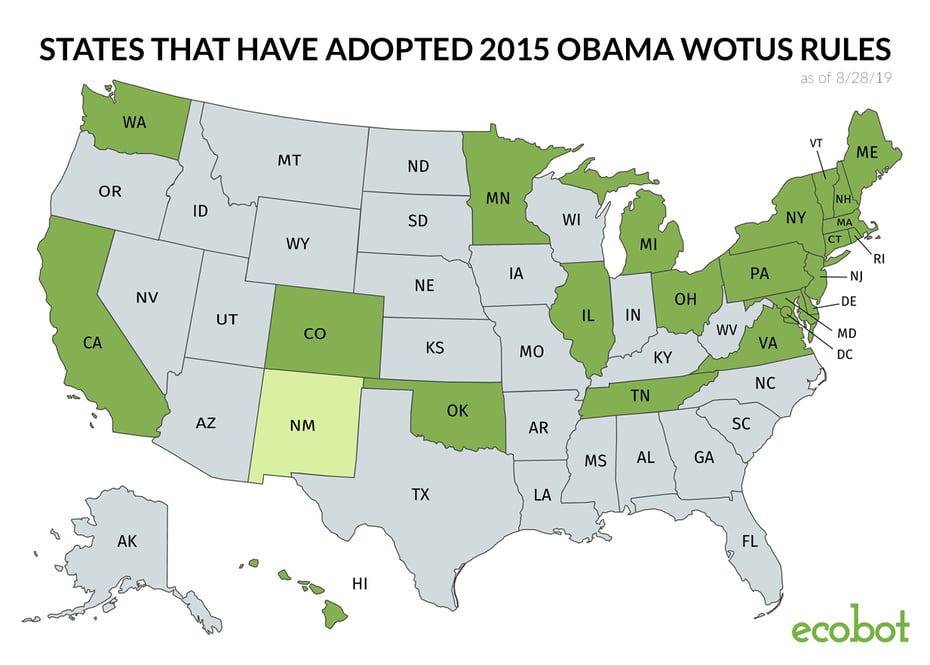 Many States have robust wetlands and streams protection programs in place that potentially could mitigate the losses of federal protection of WOTUS fairly smoothly; however, many States either do not have adequately funded protection of other waters, or have no State-level programs in place to buffer the loss of federal protection.  The 2015 WOTUS rule is currently in effect in 22 states and the District of Columbia (California, Connecticut, Colorado, Delaware, Hawaii, Illinois, Maine, Maryland, Massachusetts, Michigan, Minnesota, New Hampshire, New Jersey, New York, Ohio, Oklahoma, Pennsylvania, Rhode Island, Tennessee, Vermont, Virginia, and Washington — New Mexico is under Federal Court consideration), while regulations from the 1980s are in effect in the other 28 states.  See the latest updates on the EPA's website.

In a serious of images created by Matt Stahman, the Director of Regulatory Resources at Resource Environmental Solutions (RES), one can see how dramatic the loss of federal protection of WOTUS by the proposed Trump administration will be on all waters and wetlands across the country.

The loss of these other WOTUS on the macroscale would be devastating to the US ecology, economy, and resiliency to the impact of storms and other direct results of climate change.  Billions of dollars are pumped ever year into storm and flood cleanups.  Wetlands are directly responsible for the absorption of most major storms, floods, and hurricanes.  With a loss of storm water retention due to development of wetlands and streams, and the increase of impervious surfaces as a direct result, FEMA’s Disaster Relief Fund would need to be exponentially increased in order to pick up the lost storm buffering capacity of wetlands. 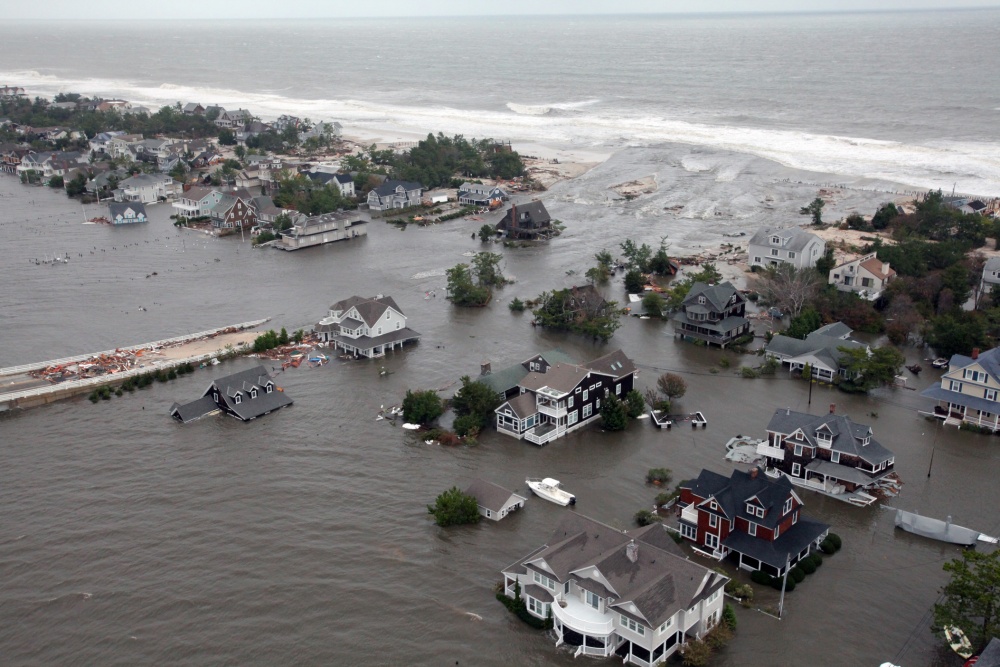 The reduction of regulated waters considered to be WOTUS by the Trump administration will be environmentally and economically devastating for the entire nation.  Storm surges, sediment loading, pollution, flooding, and high velocity streams will be amplified while many species that are threatened and endangered will be come under more duress.  And finally, our human access to clean water will be further diminished.  Clean water is crucial for life.

Standing in the gap between valuable protections of environmental resources and enablement of progress critical to economic growth, you’ll find an often unobserved but invaluable workforce: environmental consultants.  These field scientists assess waterway impacts before construction companies can move dirt, before oil and gas companies can lay down pipelines, or before DOT or rail can do work on highways and railroads; and help to insure that any potential impacts to WOTUS meet all regulatory requirement to better protect our nation’s water quality.  Most scientific and regulatory conferences in 2019 have made a concerted effort to make a stance on the proposed rule changes, mostly pushing for the higher standards of WOTUS protection set into motion by the Waters Rule of 2015 for regulatory implementation.

At Ecobot, we have built a solution to help these environmental regulatory consultants spend a greater percentage of their time providing valuable scientific discovery and impact analysis.  And when these field scientists do better work, industry can get this work done faster, cheaper and more accurately.  We have created an app for iPhones and iPads that allows wetland delineations – as required by the USACE as part of the permitting process for impacts to WOTUS ­– to be completed in half the time, with greater accuracy.  Through smart tools like we have created at Ecobot, we can help the environmental services industry to meet all of the regulatory requirements of the CWA as they stand under the Obama Waters Rule of 2015, as well as the requirements in any states that have yet to adopt the Waters Rule.

Additionally, Ecobot’s app helps meet the actual call of the Trump administration’s Executive Order (EO) 13778: Restoring the Rule of Law, Federalism, and Economic Growth by Reviewing the “Waters of the U.S.” Rule: to reduce the cost of the regulatory permitting process.

The regulations do not need an overhaul; the industry just needs better tools.

Click the button below to get the accompanying slide deck (PDF).